The Bulletin relies on links so the entire document is available to our readers. The Active Cases page provides copies of orders issued in the cases currently in process.

The last four months have been dominated by two evidentiary hearings on issues concerning wells located in the subflow zone. In 2017, Judge Brain entered an order that defined the lateral boundaries of the subflow zone along the San Pedro River. As Arizona Department of Water Resources has worked on the development of a groundwater model to serve as the basis of a proposed Subflow Depletion test, a dispute arose among the parties about the appropriate depth of the subflow zone. Arizona Department of Water Resources and the parties presented evidence in support of their positions at a hearing held in February. Post-trial briefing will conclude in June 2021.

The second hearing concerned owners of municipal and private wells located in the subflow zone who had not complied with the statutes governing appropriable water. Multiple parties presented evidence at a hearing in April on the issue of whether the adjudication court has equitable powers to decree an appropriative water right for a claimant who began withdrawing water from a well located in the subflow zone after June 12, 1919, but did not comply with the 1919 Arizona Surface Water Code and subsequent versions of that statute. Due to extensive briefing and arguments that occurred prior to the hearing, very limited post trial briefing was permitted, and it will conclude in May 2021.

Additional activity during the past four months includes the initiation of cases in the Sierra Vista subwatershed. This subwatershed is located in the southern portion of the San Pedro Watershed. The Arizona Department of Water Resources ("ADWR") investigated more than 1,500 claims and uses in this subwatershed. In terms of the number of uses and claims, stockpond, stock watering, and domestic claims and uses constitute almost 90% of claims to be adjudicated. See figure 1. Cases recently initiated primarily involve claims for irrigation. Although most of the stockpond and stock watering claims rely on surface water, three-quarters of the claims for irrigation and the vast majority of domestic uses identify wells as the source of water. To date, sixteen of the 101 contested cases involving claims for water rights for irrigation use have been initiated. 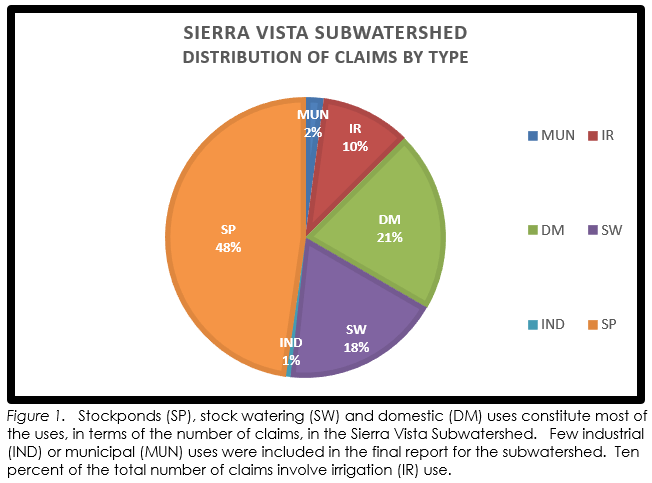 Silver Creek subwatershed is one of the five subwatersheds recognized by the Arizona Department of Water Resources in the Little Colorado River watershed. In 1990, ADWR completed a final hydrographic survey report (HSR) containing the watershed file reports for the water uses it investigated. According to the HSR, 45% of the water subject to potential water rights is used for irrigation. The HSR identified five irrigation companies and districts that diverted a total of more than 15,000-acre feet of water annually.

A much smaller percentage of the water in the subwatershed is used for stockponds and stock watering. In the early 1990s, an effort was made in the Silver Creek subwatershed to implement an expedited procedure to adjudicate the claims for stock watering and stockponds. Special Master Thorson issued a memorandum decision in 1994, but no final action was taken with respect to that report. As a result, no procedures similar to those followed in the San Pedro watershed are currently available to efficiently adjudicate de minimis uses in the Silver Creek subwatershed. A status conference is scheduled for June 17, 2021 to determine the appropriate method to again address procedures to expedite the adjudication of stockpond and stock watering uses.