The Bulletin relies on links so the entire document is available to our readers. Always check our What's New page for up-to-date notices and documents.

Owing to the diligent engagement of litigants and the technical administrative and mapping expertise of Arizona Department of Water Resources (ADWR), significant progress has been accomplished in the adjudication of water rights in the Aravaipa Subwatershed. All contested cases necessary to resolve claims investigated by ADWR in its 1991 San Pedro River Hydrographic Survey Report for water rights for irrigation use in the Aravaipa Subwatershed from surface water or wells located within the lateral boundaries of the subflow zone have been initiated and objections in 48% of these cases have been resolved.

Upon completion of the cases currently pending, a catalog of proposed water rights for the Aravaipa Subwatershed will be assembled and distributed. Interested parties may review the proposed abstracts of water rights which have been approved to date on the website maintained by ADWR. Parties will have the opportunity to file objections to the abstracts included in the catalog as allowed by the rules and court rulings. Following the resolution of any objections to the proposed abstracts included in the catalog, the Court will enter a decree for those water rights. At that point, the first of the two-step process required by A.R.S. §45-257 to adjudicate water rights in the subwatershed will be completed.

As shown in figure 1, claims for stock watering and stockponds dominate the subwatershed. More than 860 claims have either been asserted by claimants or found by ADWR and approximately 740 of those claims are in these two categories. To date, 295 claims (including claims for irrigation use) have been resolved in the subwatershed by dismissal, settlement, trial or by an expedited procedure available for de minimis stock watering, stockpond. and domestic claims. 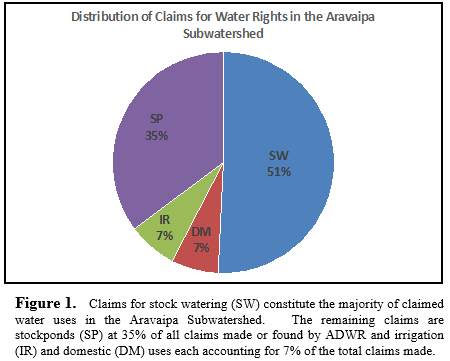 Completion of the adjudication of water rights in the Aravaipa subwatershed from sources located within the lateral boundaries of the subflow zone will require the initiation of 84 cases (contested cases usually include multiple claims) and lifting the stay on another eight cases imposed after the amendment of A.R.S. §45-257. The expedited procedures available for de minimis uses will be implemented to evaluate approximately 560 outstanding claims for stock watering, stockponds, and domestic uses and to generate the appropriate proposed abstracts for the water rights.

Notably, the Arizona State Land Department is a named landowner in 28 of the cases that will be initiated after the irrigation water rights are decreed. Accordingly, the parties may wish to consider beginning the development of a plan to satisfy A.R.S. §37-321.01 to resolve the ownership of a right to use water on state land in the Aravaipa Subwatershed for those cases.

The largest percentage of contested cases in a subwatershed involving claims for rights to water for irrigation use occurs in the Benson Subwatershed. See figure 2. 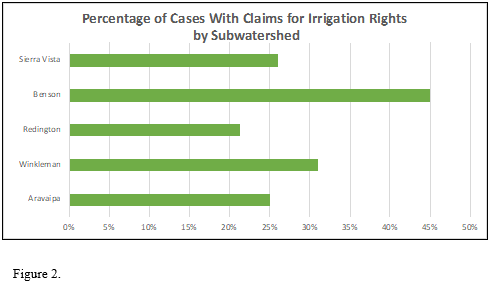 Currently, 119 contested cases involving claims for irrigation water rights in the Benson Subwatershed have been consolidated in In re St. David Irrigation, contested case no. W1-11-1675. During the scheduling conference in that case held on August 15, 2019, the parties agreed that the consolidated case will be tried in at least two phases. The first phase of the case will try the following issues:

This case will determine the subflow depletion test for the San Pedro Watershed. Following a meeting of experts in June 2019 to discuss the development of a model by ADWR, a status conference was held to address the issues listed in ADWR’s report as issues identified by the parties requiring resolution. Those issues are:

The parties are currently briefing these issues. Oral argument on these four issues will be held on December 11, 2019 at 1:30 p.m. During this same time period, Salt River Project is developing a demonstration project to illustrate its position on one aspect of ADWR’s model. It will distribute the results of its demonstration project to ADWR and all parties on the Court-approved mailing list by November 1, 2019. ADWR will file a report concerning its position on SRP’s demonstration project proposal by December 6, 2019 along with a schedule for the continual development of the subflow depletion test for the period December 6, 2019 through March 31, 2019.

On June 1, 2019 the Special Master issued a Draft Report with findings of fact and conclusions of law about the past and present water uses on the Hopi Reservation. Objections to the Draft Report are due September 30, 2019. The second phase of the trial begins on June 1, 2020.

In re the Lower Little Colorado River Subwatershed, case no. CV 6417-400

On July 31, 2019, ADWR filed a technical report analyzing stockponds, stock watering, and wildlife uses in the Little Colorado River subwatershed and their cumulative impact on surface water outflow from the watershed. The purpose of the report is to enable a determination to be made whether those types of uses in the subwatershed constitute de minimis uses thereby enabling the Court to develop expedited procedures to resolve those types of claims. Objections to the technical report must be filed with the Apache County Superior Court by January 27, 2020. An initial status conference will be held on February 5, 2020.

This summer the Special Master was fortunate to have a summer extern, Luke Erickson, work on the General Stream Adjudication. Luke is a second-year law student at the University of Arizona who did legal research on contested cases in the Adjudication and assisted in data collection on the cases and claims made in the San Pedro River subwatershed.